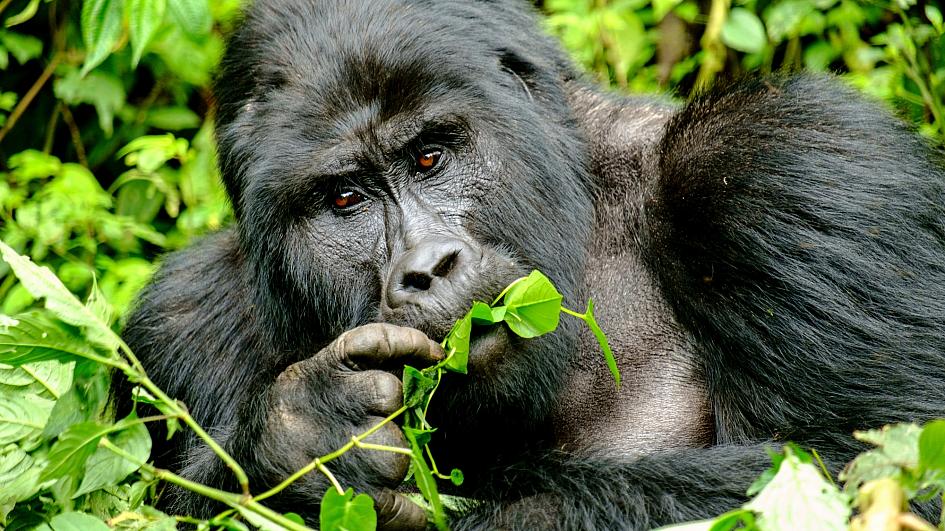 New research has found that tourists’ selfies may be putting mountain gorillas at risk of contracting COVID-19.

The team concluded that most travellers were close enough to the animals, while taking the photos, to transmit the virus – particularly as most were not wearing face masks.

Researchers have described the findings as “very concerning”, highlighting the very real risk of disease transmission between tourists and gorillas.

“It is vital that we strengthen and enforce tour regulations to ensure gorilla trekking practices do not further threaten these already imperilled great apes,” says lead author Gaspard Van Hamme.

“In the photos we analysed, we found that face masks were rarely worn by tourists visiting gorillas and that brings potential for disease transmission between people and the gorillas they visit,” explains Dr Magdalena Svensson, a biological anthropology lecturer at Oxford Brookes.

Last month the IUCN issued a set of guidelines asking scientists to stop sharing selfies with primates, due to concerns that the photos may be driving the illegal wildlife trade. According to this week’s research, it seems Instagram pictures may be a driving force behind the issue here too.

“Tourists are willing to share their too-close encounters with mountain gorillas through Instagram, which creates expectations for future tourists,” says Dr Gladys Kalema-Zikusoka from Conservation Through Public Health, Uganda.

“It highlights a great need for responsible tourism to provide adequate protection while minimising disease transmission, especially now during the COVID-19 pandemic,” she adds.

What is the risk to gorillas and other mammals?

According to biologists, there have been many examples of great apes like gorillas experiencing respiratory diseases usually found in humans.

“Apes are susceptible to respiratory diseases and they may exhibit stronger symptoms than humans and obviously do not have access to treatment,” explained Martha Robbins, a conservationist at the Max Planck Institute in Germany, to Forbes.

In the past other disease outbreaks have affected great apes similarly to humans. From 2002-2003 Ebola killed 5,500 endangered western gorillas at the Lossi Sanctuary in the Republic of Congo, with the virus causing a third of gorilla deaths in the DRC since the 1990s. It is feared that a similar spread of COVID-19 would also devastate the remaining great ape populations.

A post shared by The Dian Fossey Gorilla Fund (@savinggorillas)

Last month captive gorillas at San Diego Zoo, USA tested positive for the virus which causes COVID-19. The apes were the latest in a growing collection of non-human animals who have contracted the disease.

Four lions tested positive at Barcelona Zoo last December too, in only the second known case of big cats testing positive for COVID-19. It is believed that they were exposed to the virus by staff, but fortunately have all made a full recovery.

According to CNN, at least 2,000 animals in the US alone had tested positive for the coronavirus by October last year. The majority of these cases (80 per cent) were in cats and dogs whose owners were also unwell.

What is ‘great ape tourism’?

Specific ‘great ape tourism’ or ‘gorilla trekking’ was stopped last March in the wake of the pandemic. But last summer, as travel partially reopened, visitors were able to return to some parts of in Uganda, Rwanda, and the Democratic Republic of Congo.

This type of tourism has been controversial in the past with critics accusing tour operators of exploitative practices. However in recent years there has been a push for the focus to be on funding conservation, with the IUCN releasing guidelines for ensuring tourism is used appropriately.

The financial impact of the pandemic has already jeopardised wildlife projects around the world, but especially across Africa. The Virunga National Park in the DRC is a UNESCO World Heritage Site and home to more than half the global population of mountain gorillas – but the park has been closed since late March.

Rangers at the reserve have also been facing increased conflict with armed poachers and other assailants since the sanctuary’s closure, with 12 rangers killed last April and a further six last month.

With no visitors to help fund the park, the future of the vulnerable great apes – and those who risk their lives to protect them – has been uncertain. But last May, actor and philanthropist Leonardo DiCaprio helped save Virunga as part of a €1.8m grant.

It’s hoped that this funding will help protect and fund the sanctuary until it is safe for visitors to return.

And if you are planning on visiting any great apes in the future, the researchers at Oxford Brookes advise keeping a distance of at least seven metres, and wearing a mask while the pandemic is still ongoing.