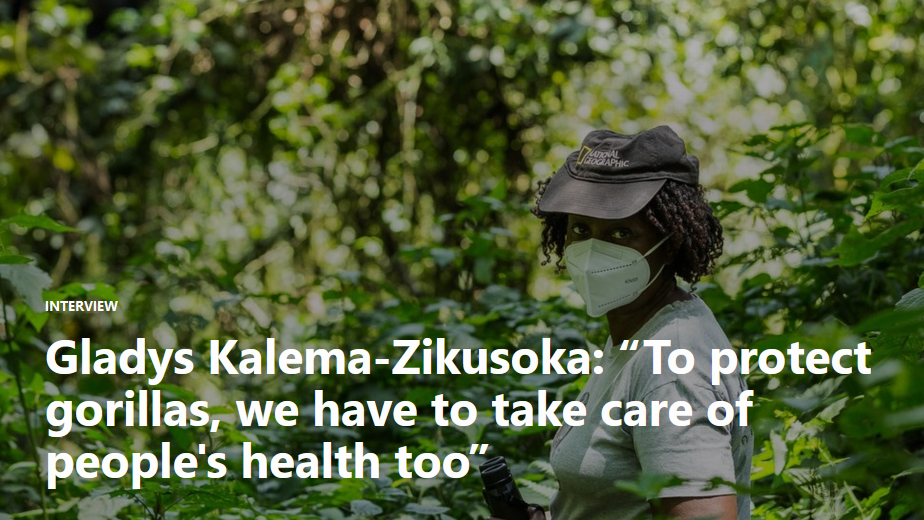 15 Aug Gladys Kalema-Zikusoka: “To protect gorillas, we have to take care of people’s health too”

Gladys Kalema-Zikusoka wants to improve the health of Uganda’s gorillas by also improving the lives of the populations that surround the ecological reserve. “It’s all interconnected”, says the veterinarian distinguished this year with the Edinburgh Medal.

Gladys Kalema-Zikusoka was the first veterinarian hired by the Uganda Wildlife Authority. When she arrived at the gorilla reserves in 1994, there were only 650 of these animals. Today there are more than a thousand. This evolution was due to the fact that the veterinarian takes care not only of primates, but also of people.

Enthusiastic of the “ one health ” approach, Kalema-Zikusoka wants to improve the well-being of gorillas in Uganda by also improving the lives of the populations that surround the ecological reserve . In his opinion, “ ‘s all interconnected ” . If communities don’t have money, they will also have worse hygiene habits, resorting to poaching and forest destruction as a means of subsistence. Animal health depends on human and environmental health. Everything is one thing, he guarantees.

Human diseases can be transmitted to gorillas because they often come out of parks in Uganda. “They lost the fear of people”, says Kalema-Zikusoka, this year awarded the Edinburgh Medal. In December 2021, she received the Champions of Earth award for science and innovation, an award from the United Nations Environment Programme.

He founded and directs the Conservation Through Public Health initiative, where he leads strategic programs in conjunction with the local community. In this interview with PÚBLICO, conducted by videoconference from Uganda, Gladys Kalema-Zikusoka explains how she managed to integrate public health into conservation programs and, at the same time, support the economic activity of local coffee growers to mitigate poaching.

He founded the project Conservation Through Public Health ( CTPH , which promotes programs that treat human, animal and environmental health as “one health”. When did you realize that conservation and public health are inseparable areas?
One of the first cases I had to deal with here, when I created the veterinary unit at the Uganda Wildlife Authority, was gorillas who contracted scabies. This skin disease caused them to lose hair, leaving their skin whitish, scaly and very itchy. A baby gorilla lost three quarters of its fur and eventually died. We managed to make the other animals recover after a treatment with ivermectin. Four years later, there was a new outbreak in another part of the park. It was then that we realized that these situations resulted from the fact that the local human population had health problems.

Gorillas get scabies because they spend a lot of time outside parks with communities. They lost the fear of people. This is because, when they return to the spaces where they lived before the forest was cut, they find people. Gorillas like bananas and eucalyptus bark and they find these foods in communities. When we realized that scabies came from contact with the population, it became clear that it was not enough to take care of the gorillas’ health – it was also necessary to improve people’s health. It’s all interconnected.

When we realized that scabies came from contact with the population, it became clear that it was not enough to take care of the gorillas' health – it was also necessary to improve people's health.

How did a veterinary unit manage to promote public health?
We did workshops with the community. A few years after the scabies outbreaks, they were the ones who asked me to lead this initiative. It was a turning point in my life. When we went to meet them and told them what the problem was – people transmitting diseases to gorillas – the inhabitants themselves came up with very good solutions. At that time, they were already starting to like the gorillas: they saw tourists arriving, their children getting jobs, selling handicrafts, lodging, food.

What were the solutions presented?
I arrived at the meeting with them thinking that I had the solution, which consisted of educating them, talking to them about being healthier through hygiene habits. I explained that contact with people often made gorillas sick. I mentioned that these animals are very curious and that they probably touched clothes – and unfortunately hygiene is limited. I was about to present my solution when the rangers and district health workers touched my hand and said, “Let them talk and find solutions.”

And many of them wanted [health] services to be brought closer to them. The community is 32 kilometers from the nearest health centre. There is no public transport. If someone is very sick, they are obliged to transport him on a stretcher to the health post. That’s how it used to be. Now, we see the health of gorillas, people and the forest as one health. So many people were actually dying from preventable diseases. And those same problems spread to great apes, gorillas and chimpanzees.

It is curious how the best solutions tend to emerge from the affected community itself.
Yup. There was also the idea of ​​having rangers in the park, as well as gorilla guardians. We had beautiful blue shirts made [for this activity]. They said they wanted it to be a continuous activity, but that they would need food rations and rubber boots to do the job better. The idea was to have people bring the gorillas back whenever they left the park and went to the communities. Everyone welcomed the idea of ​​guardians because there were experiences of gorillas eating crops, or the case of an animal scratching someone and the community getting upset.

Can only men be guardians?
Currently, we only have men. I’m trying to get the groups to have some women too, but they still haven’t accepted. But there is a group of men who are volunteers, and who help the rangers to bring the gorillas back. The guards can’t be everywhere, and furthermore, we think that the people who bring the gorillas back shouldn’t be the same people who take care of them, that is, the people the gorillas see every day. Because they would receive mixed signals, they are very intelligent animals. Guardians have to be people outside the park [so that the idea of ​​what is inside and outside the safe boundary is clear]. It was based on this thinking that we jointly decided that the guardians would support the rangers , but not be contract employees. Rangers . perform different roles and in different ways However, rangers are trained to collect gorilla faeces samples from community lands. This aspect is important because it is precisely in villages that animals are most prone to contracting diseases.

What can gorilla faeces tell us about what they eat and their health?
We examine gorilla faeces every month, but only those who are used to it – that is, those we can approach and monitor daily. Half the gorillas in Bwindi National Park are used to it, half are not. Through these tests we can check for the presence of parasites, bacteria and, more recently, viruses such as covid. We usually collect samples in the nests – it may seem strange, but every night gorillas make a kind of bed with branches and leaves. From the age of five, a gorilla is already able to build its own “mattress” to sleep. When they get up in the morning, they defecate in the nest. And this is where we can collect samples and find out how these animals are doing. It is also possible to take samples as we follow them on the trails. If a sample reveals an abnormal result, then we start collecting more regularly.

He helped create the coffee brand Gorilla Conservation Coffee. How did this idea come about?
We started with improving the health of gorillas: we set up a laboratory at our Center for Conservation and Community Health, where we analyzed samples not only from gorillas, but sometimes from people and even livestock. If we find an area where there are a lot of parasites, we try to treat everyone affected. The second stage was the health communication part, with the objective of changing certain behaviors: encouraging hand washing, guaranteeing stations with water so that this habit is consolidated, discouraging the leaving of fecal matter exposed in the gardens. The more we listened to people, the more we realized that, in fact, many people in the community lacked good health not just because they were poor. We needed to help them improve their livelihoods. There were several non-governmental organizations working in this area, but none were dedicated to the coffee farmers that border the park.

How does the sale of an agricultural product support the conservation of a forest reserve?
We found that farmers were not getting a good price for their coffee. And so they continued to go into the forest to hunt animals. They were hungry. They wanted to buy meat, but they had no money. In practice, they continued to depend on the forest to meet basic needs, since they did not obtain a fair price for the coffee they produced. So my husband had the idea for us to develop a global coffee brand that could save gorillas. We ended up adding this valence to our community programs. We’ve hired agronomists and trained the community to improve coffee even further – we’re at a high altitude, we have the perfect conditions for excellent Arabica.

The product was rated among the best in California by Coffee Review . It’s delicious coffee! Thus, producers are rewarded as we grant an additional 50 cents per kilo over the market value. It’s like a conservation award, if you can call it that. They understood that it is the park that values ​​the brand of the coffee they sell and, therefore, they become allies in conservation. In the past some of them could have been called poachers. People who used to poach and stopped because coffee keeps them out of the park.

How many coffee growers participate in the project?
We have over 500 farmers. The only problem is that you can’t buy all the coffee produced. The park doesn’t have enough money. We only acquired about a third. We are trying to find solutions to dispose of surplus production, I was recently in Italy to try to integrate a program that helps us to expand the market for coffee. Buying our coffee is providing sustainable funding for conservation and public health. We think it will be a good complement to ecological tourism. Today most of the customers are tourists who come to Uganda to visit the gorillas. We now need to reach more people.

She started out worried about the health of the gorillas, then realized she would have to take care of people too. She eventually concluded that community livelihoods also matter. What is it now that keeps you up at night?
It’s a tough question. Many things keep me awake. We care not only that the gorillas are well protected, but also that the numbers continue to grow. And that there is a ecosystem capable of receiving these larger groups of animals. Is there enough space for them? Do we have the capacity to grow? For example, the number of gorillas has increased since I started working with them. They’ve gone from around 650 in 1994 to over 1000 now. This is good news, but space is running out in both Uganda and Rwanda parks. We started to question whether people are willing to sell land to expand the park.

Another thing that makes me sleepy is the pandemic, the new variants. How would gorillas react? We do not know. Tourists are eager to return. Many follow the rules, but others do not. What should we do about it? So it’s conservation efforts that keep me up at night. They are a small part of the fight against much greater environmental degradation that contributes to the climate crisis we face.