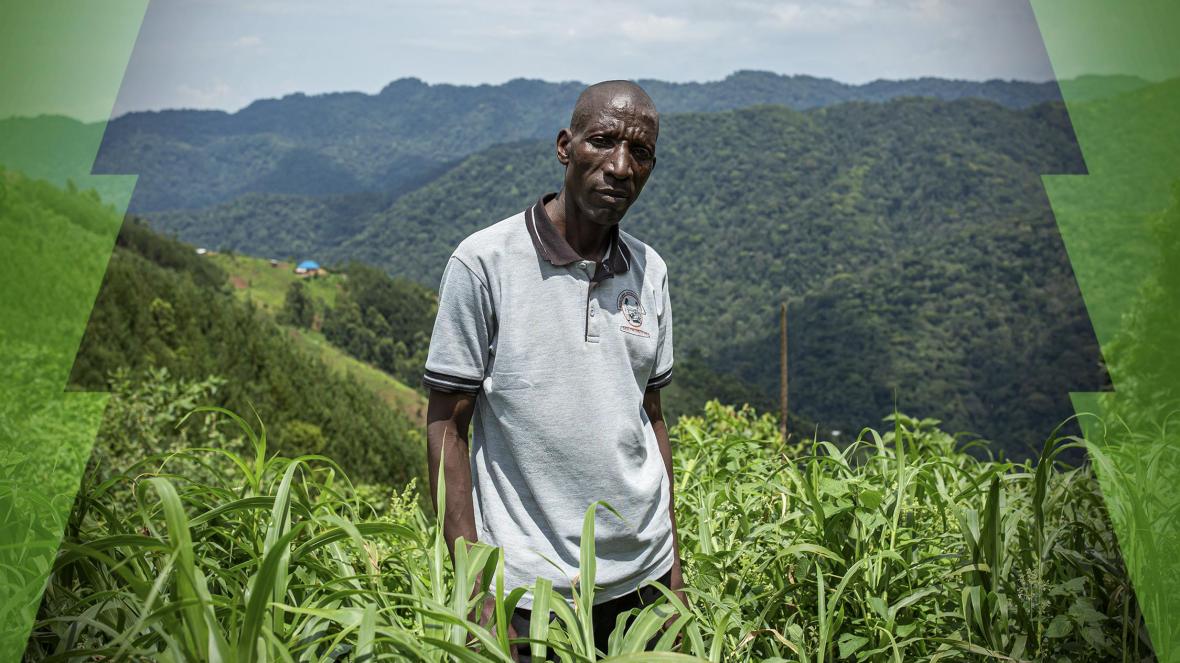 12 Dec Eyes on the prize for Ugandan poachers turned conservationists

Posted at 09:30h in CTPH, Featured by CTPH 0 Comments
0 Likes
Share this article

Resisting the urge to hurl a spear at a passing bush pig or a buck is still a struggle for Petero Tibategeza. Hunting in Africa’s oldest rainforest was his life for half a century.

“My arm twitches when I see something running,” he admitted, jerking his stick in a mock throw. “It comes like breathing.”

Mr Tibategeza, 62, was finally persuaded to surrender his traps and snares four years ago by his local association of reformed poachers in Nkuringo, on the edge of Uganda’s Bwindi Impenetrable national park. In return for taking an oath not to plunder the natural assets of the forest, the group’s 150 members are helped to establish alternative, sustainable incomes without the need to poach or log.

Helping to fund the growth of these livelihoods is the British conservation organisation Tusk, one of the charities supported by this year’s Times and Sunday Times Christmas appeal.

The coronavirus pandemic is sorely testing the resolve of Bwindi’s rehabilitated poachers. A lengthy closure of the park to tourists has decimated the local economy and left swathes suddenly without livelihoods — a job in the tourist sector typically supports a dozen dependants.

In their growing desperation, people have increasingly turned to the park in search of bush meat and wood to survive. Rangers from the Uganda Wildlife Authority are retrieving hundreds of snares and traps each week from the park, which is home to nearly half the world’s remaining endangered mountain gorillas.

Bernard Katungi, 40, chairman of Nkuringo’s reformed poachers association, knows that now is not the most profitable time to be recruiting new members. He is busy enough trying to keep his current membership honest.

“It is easy to return to old ways when you are hungry,” he said during a visit by The Times to the group.

Although tourism to the park is slowly reopening, a full recovery of jobs could take years. The shortfall in park entrance fees and lost sales of gorilla trekking permits, which bankrolls the protection of its animals and trees, has also put the wildlife authority under strain.

Habitat loss is one of the biggest threats to Bwindi’s 51 mountain gorilla families and conservationists worry that poverty triggered by the pandemic will set back years of gains. The species was removed from the critically endangered list in 2018 after efforts lifted their numbers from just 230 in the Eighties to more than 1,000 across ranges in Uganda, neighbouring Rwanda and the Democratic Republic of the Congo.

Mr Tibategeza is typical of the organisation’s older members whose families had lived in and off the forest for generations until the area was incorporated into Bwindi Impenetrable national park. He had little time for school between helping his father and grandfather to track and set traps. “I can’t even count,” Mr Tibategeza said.

When the park was designated in the early Nineties and forest families were relocated to safeguard its wildlife and trees, the alternatives to poaching were limited.

As part of its efforts to find workable ways to reduce conflict between humans and animals, Tusk is providing emergency funding to the reformed poachers association and other struggling households living near Bwindi as a buffer against the devastating impact of the pandemic.

The funding boost has been raised by the Wildlife Ranger Challenge, a pan-African virtual half-marathon that Tusk helped to organise between 50 competing teams of rangers carrying their typical 25kg backpack and equipment.

Tusk’s local partner in the area, Conservation Through Public Health (CTPH), has provided targeted beneficiaries, including Mr Tibategeza, with livestock and supplies of seedlings to help them establish smallholdings. A network of volunteers from CTPH is providing training and monitoring progress.

Working the land and having animals of their own “will keep them too busy and well fed to poach”, Mr Katungi said, with an eye on his next drive for new members. “We will bring other poachers to see what is being done for those who stay away from the park. I hope they will see there is another way to survive.”

Tusk provides funding and support to local conservation groups in 20 African countries. All donations to Tusk through the Times appeal up to £150,000 will be doubled by the Nick Maughan Foundation, run by the British businessman and philanthropist.

To donate to Tusk through The Times and Sunday Times Christmas Appeal visit thetimes.co.uk/christmasappeal or call 0151 284 2336.

Calls are charged at normal landline rate. Charges from other networks may vary. Donations will be administered by the Charities Trust on behalf of the chosen charities. Donations may be refunded only in exceptional circumstances. Ts&Cs apply 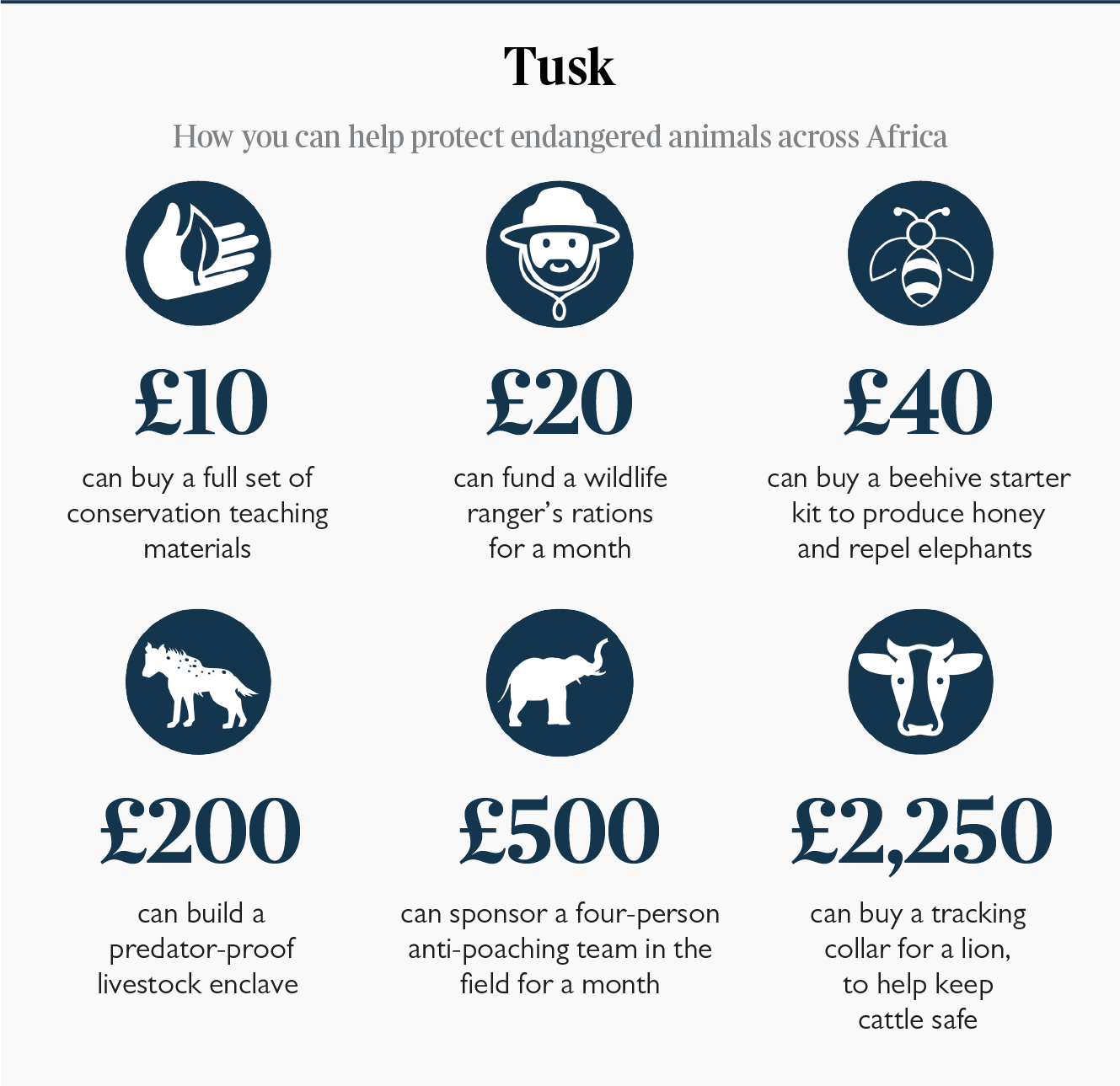