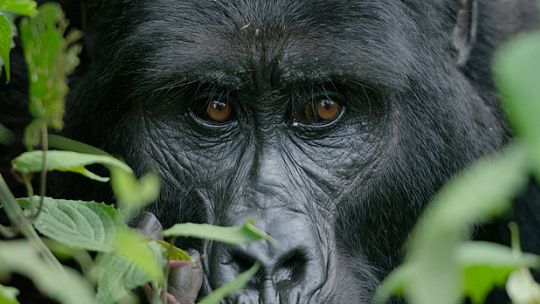 23 May Are health investments paying off for endangered wildlife?

Posted at 12:41h in Uncategorized by Michael 0 Comments
0 Likes
Share this article

An innovative project in Uganda’s Bwindi Impenetrable National Park has helped the local community understand the links between health and conservation. The next step is to examine the project’s impacts in more detail, and explore prospects for scaling up.

Mitunu, a female of the Mubare gorilla group in Bwindi Impenetrable National Park, is one of the few remaining critically endangered mountain gorillas left in the wild. CTPH programs promote health and conservation to save Mitunu and her family (Photo: Ryoma Otsuka)

Gladys and her colleagues managed to contain the outbreak. But particularly saddened by the death of a baby gorilla called Ruhara – who died aged just nine months – the team was determined to uncover the source of the outbreak.

The investigation led to the people living around Bwindi − and a troubling discovery.

This region is one of the poorest and most densely populated regions of Africa. With limited access to basic healthcare, the local communities are often affected by highly contagious, but preventable, diseases such as scabies: the scabies in the mountain gorillas had come from the local people.

To raise awareness of the dangers of transmitting disease between humans and gorillas, Gladys set up the charity,
Conservation Through Public Health (CTPH).

Over 10 years on, CTPH has received multiple awards for its efforts to support the co-existence of people and the endangered wildlife around Bwindi.

The CTPH approach combines conservation with efforts to improve public health and protect the local environment. It also seeks to manage the area’s rapid population growth. At 3.3 per cent,
Uganda has one of the highest population growth rates in the world, and families living around Bwindi will often have up to 10 children.

CTPH’s Village Health and Conservation Teams – made up of volunteers − travel to communities around Bwindi and provide general conservation and health information as well as access to family planning and basic health care.

They also share positive stories of how Bwindi’s mountain gorillas are supporting the local tourism trade – bringing with it jobs at hotels and restaurants, and incomes from local crafts. The volunteers also give advice on how to deter the gorillas from raiding families’ essential food crops.

The commitment from the Village Health and Conservation Teams, which are currently reaching more than 5,000 homes around Bwindi, has been remarkable. They continued their work even after project funding had run out − thanks in part to the groups being able to generate their own income to support their families.

Fifty per cent of the volunteers are women. Seeing their communities benefit from their work has been an empowering experience. 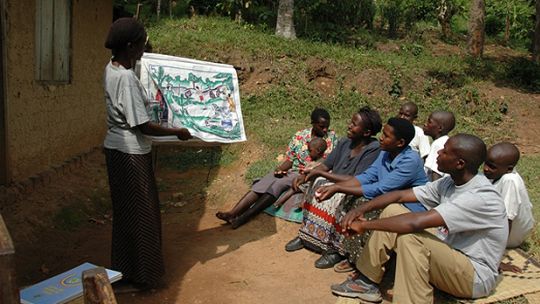 A Village Health and Conservation Team volunteer at Bwindi gives a group talk to her community (Photo: CTPH)

Clear health benefits – but what about conservation?

CTPH has achieved important health gains for communities surrounding Bwindi. Adoption of family planning practices had increased from 20 per cent in 2007 to 60 per cent by 2013 – well above the national average of 30 per cent. Referrals of cases of suspected tuberculosis have increased 11 times.

But the impact on conservation tends to emerge over the longer term and is less easy to quantify. It has been harder to for CTPH to understand how supporting community health has led to conservation gains, in particular for the mountain gorillas.

CTPH staff and volunteers see more community members, including young people and women, involved in conservation. Cases of human-wildlife conflict appear to be falling and there are fewer gorillas falling sick.

But they don’t have robust evidence to support these trends. Nor do they have information on how their work has impacted other areas such as illegal logging or poaching.

Measuring impact and scaling up

A new project led by CTPH alongside the
Interdisciplinary Centre for Conservation (Oxford University), IIED and national Ugandan partners will evaluate whether and how investing in community health supports conservation. 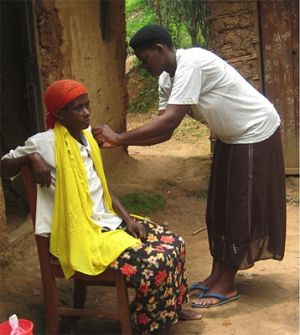 A CTPH Village Health and Conservation Team member administers an injectable contraceptive (Photo: CTPH)Funded by the UK’s Darwin Initiative, it will draw out key learnings and insights as CTPH looks to expand its approach to other protected areas beyond Bwindi.

One of these areas in Uganda is Mount Elgon National Park − it will be interesting to see if and how the approach can be scaled up to a region where there are no mountain gorillas.

Internationally, CTPH is also beginning to operate in Virunga National Park in the Democratic Republic of Congo. Here, decades of conflict and
pervasive mistrust of conservation among communities will present new challenges for CTPH, especially their Village Health and Conservation Teams.

As the project progresses, watch this space for blogs and interviews as IIED and partners work with CTPH to evaluate and scale up their innovative approach.